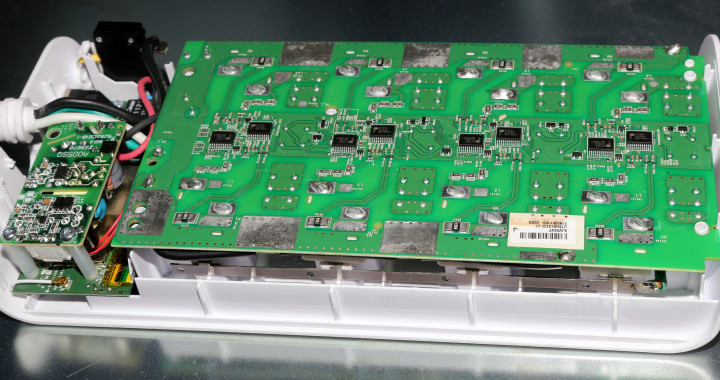 First some links if you aren’t already familiar with Ubiquiti’s mFi platform – it is more than just a web enabled power switch – think vast automation capabilities when paired with their other devices and software. They also make some of the best wifi and networking devices for home and small business. I have a 5 mile wifi link with some of their other equipment, the web interface on all of their devices is top notch with just the right level of control and simplicity, with the option of SSH and SNMP etc.. for those who want it 😉 – Will have to do a review on some of their other devices sometime.

The main power monitoring is done by an IC from Prolific who you may recognize as a popular USB-RS232 serial adapter IC maker. This is a very advanced chip with SPI interface, the voltage reading was spot on compared to my Fluke 87-III multimeter and current measurement aswell.

It appears to use a .003 ohm current sense resistor.

The IC chips on the top of the pcb are SN74LV138ADR 3 bit to 8 bit decoders. – I am guessing used to toggle the power relays through the little SOT-23 MOSFETs visible on the underside near the relays.

Looks very well made and the thing is like a puzzle to put together – I do not recommend disassembling this far unless you have to.

The Neutral traces have a nice fat #12 wire to augument the current capacity of the already thick double sided traces around the outside edge of the PCB. The Hot line is not nearly as beefy with just a single sided trace running under each row of Relays. I suspect this is because the current sense resistors are all on the neutral side and the designers had to keep the voltage drop between all the channels very small.

Speaking of which the entire logic side is floating at the potential of the Neutral input. Just something to be aware of if you try to plug it in while its open 😉