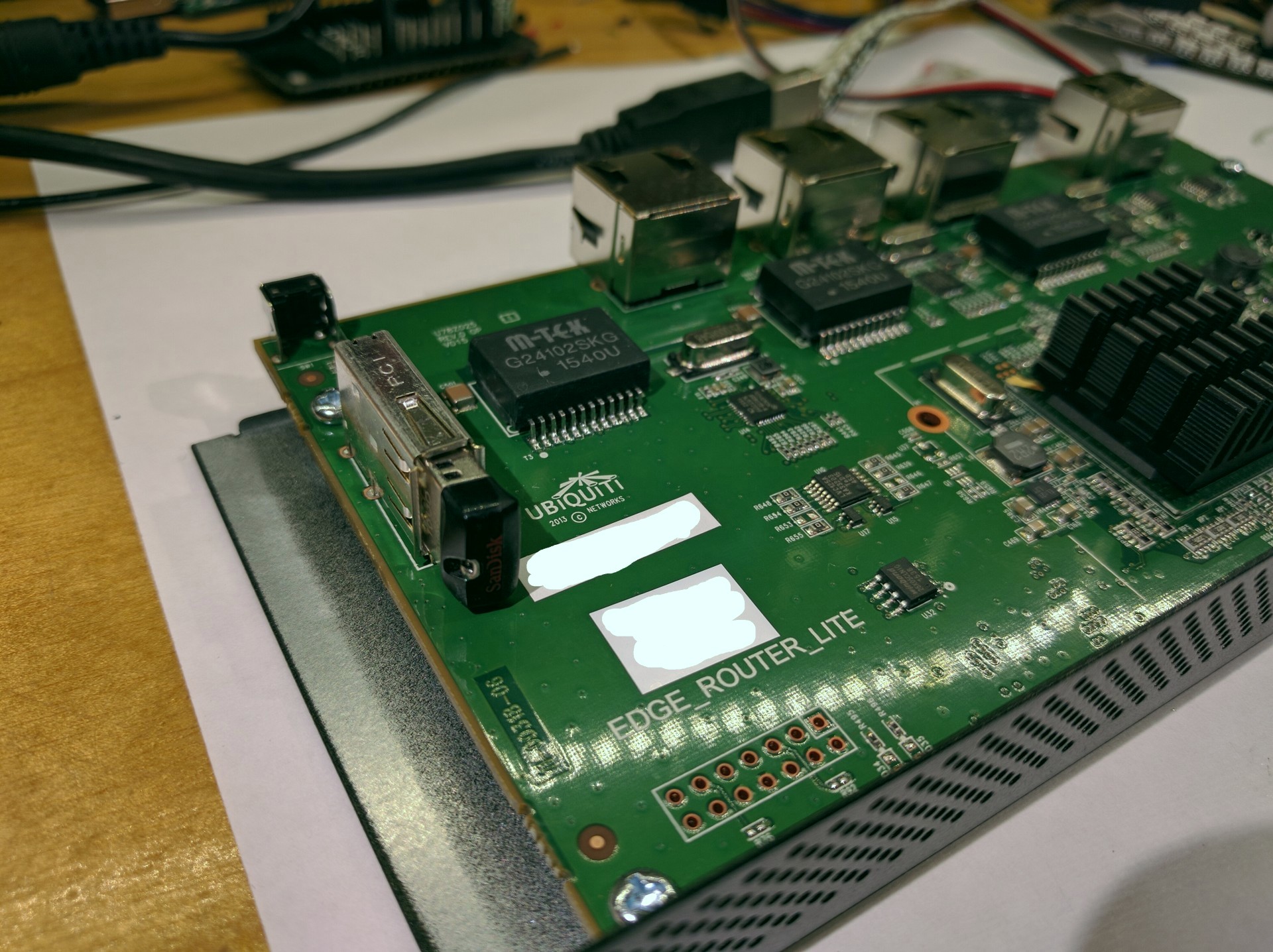 I currently own 6 of these Ubiquiti Edgerouter Lite ERLITE-3

routers, I have been using them since late 2013 and was impressed by their sustained speed and never needing to be reset under heavy load (30+ users) that would bring most consumer grade routers to a standstill.. Unfortunately it also turned out that sometimes upon reboot they would not come back online, which led me to RMA two of them(Ubiquiti has a good 1 year return policy) and also put all of them on UPS backup power supplies.  Unfortunately this did not stop the failures from happening, it didn’t seem to matter if the router was hard reset from power failure or the reboot command from the GUI, upon reboot the device would not restart with nothing visible on the ETH0 interface. Pushing the hard reset switch on the device did nothing.

If you happen to have or purchase on Ebay for $15 a Cisco CAT5 – USB serial cable you can access the internal hardware serial port through a serial terminal locally connected to the device. – Keep in mind this is not necessary and you can use the guide further on to rewrite your USB drive without needing any serial cables.

As you can see the 4GB USB flash drive image is either not present or corrupted..

If you have another working router with un-corrupted flash you can use this tool to directly image the whole drive and make an exact duplicate. Since I had a brand new replacement router handy fresh from the RMA process this is what I did.

The drive is NO LONGER recommended as Sandisk seems to have come out with a slightly different newer version (under the same part number!) that is no longer compatible with these routers.. It was reported in post 308 in this thread: http://community.ubnt.com/t5/EdgeMAX/EdgeMax-rescue-kit-now-you-can-reinstall-EdgeOS-from-scratch/m-p/1494957

I have not looked too far into finding a new replacement drive that always works, as all my routers are still functioning on the older Sandisk ones. My recommendation to anyone doing this fix is to try any USB 2.0 drives you already own that will fit in the case. Anything from 4GB – 16 (maybe 32gb?) should work. You wont gain the extra storage space unless you reformat the partitions, but the extra space may help the flash drive keep itself running longer as it should in theory be able to reallocate bad sectors to the un-formatted space – if its controller is smart enough.

Here is a fresh copy (default user pass) of the USB flash drive compressed in a Zip file. It is only 97MB but will be 4GB once you decompress it 😉 shows you how much of that space on the partition is empty.
EdgeOS 4GB Image.zip MD5 file checksum B57BFED8BC721D3E58F5D290DD12538A Verify it here

Mike from below in the comments section has created this neat script to generate your own flash drive image from up to date firmware upgrades downloaded direct from Ubiquiti. Below is a quote from him:

“Major differences from other methods:

His script code with instructions: https://github.com/sowbug/mkeosimg

– According to Roberto and Shawn in the comments it works great!

I have since tried this method and it works great!! You will probably get an error like this “chown: changing ownership of “/mnt/boot/vmlinux.64”: Operation not permitted” and the same for “vmlinux.64.md5” which can be ignored – image works fine.

Here is a quote from Shawn “Thank You! Just rescued an early (plastic case) ER-lite using Mike’s script. Script did throw a couple errors: ‘chown: changing ownership of “/mnt/boot/vmlinux.64”: Operation not permitted’, and an same error for ‘vmlinux.64.md5’, but the resulting IMG works.”

There are newer versions of the firmware since I made the image so my first step after doing this is to download and install the latest firmware using the normal web interface procedure.

Only caveat is that I just performed this operation a few days ago so only time will tell if the Sandisk flash drives really work in the long run.

Update 2016-9-27: It has been 23 months now with no failures of the Sandisk 8GB drives. – Note the same drives Sandisk ships today are not compatible with these routers. – Don’t ask me why.

Ubiquiti Community Forum member NVX is responsible for the idea behind this(thanks!) – he reports no failures since replacing the original drives with Sandisk ones. So lets hope for the best!

Lots of other useful information is in this thread:
http://community.ubnt.com/t5/EdgeMAX/EdgeMax-rescue-kit-now-you-can-reinstall-EdgeOS-from-scratch/m-p/1081065#M46148

Including information on how to manually reinstall the router images into a blank flash drive and increase the partition sizes if you want more than 4GB accessible to your router.

Defective Drive (4 have failed on me):

Drive in most recent RMA replacement router I have received (this drive may not fail prematurely):